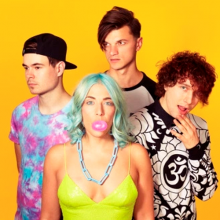 Scottish experimental rock four-piece Vukovi have been around for a little while already, but now they’re ready to stand up and be noticed. We spoke to vocalist Janine to find out everything you need to know about Vukovi: how they formed, what’s going on for them right now, and what they have coming up in the future. Get psyched, because they’re an incredibly exciting band.

Vukovi originally formed because the three other members of the band – Hamish, Jason and Colin – were in a band that wasn’t working. “They were in a band called Wolves that had a male singer and they felt that it wasn’t working out, so they got me on board and we renamed ourselves Vukovi, which means ‘wolves’ in Serbian/Croatian,” says Janine.

“We jammed a few ideas and then added lyrics and melodies to them. We then recorded our first song ‘Get Hot And Feel The Butterflies’ within two months of forming and when we uploaded the track it got played by BBC Introducing as a Ones To Watch track,” says Janine.

“At that point we felt we should probably take the band seriously. From then on we concentrated on building a solid fanbase by not releasing too much content at one time. We put a lot of thought into our music videos and played sporadically in our hometown so there was demand to come and see us. It definitely paid off.”

“We’re now working with a fantastic agent who came across us on BBC Introducing and recently signed a single deal with new label First Run Records, as well as a publishing deal with Notting Hill Publishing. It’s taken time to get the right team around us including management but we feel totally satisfied and confident that this is the best team we’ve had yet,” states Janine.

As for their music, they cite Rage Against The Machine, Florence Welch, Death From Above 1979, Foals, Sia and Incubus as their eclectic main influences. Although it sounds like a wide range, all of these influences can be seen in their music, especially in their recent single ‘So Long Gone’, which you can watch below. The song is hugely vibrant, ballsy and melodic all at the same time. Basically it’s bloody fantastic.

On the subject of ‘So Long Gone’, frontwoman Janine says: “We wanted to test the water for our first single by putting out a sort of easy listening track to break potential new fans in gently, but for our next single we’ll definitely be notching it up a gear.”

As for the future, Vukovi are working on their debut full-length album as we speak. “We’ve nearly finished writing the album and we’re all gagging to get it recorded before Christmas so we can release it at the end of next year, ideally. It’s been a long time coming, but hopefully our patience and our fans’ patience will be worthwhile.”

There are no solid plans for touring as of yet, but they hope to play some shows and festivals next year. And what about their long term goals? “I think we’re all just gagging to put out a brilliant album where we’ve been true to ourselves and the sound of Vukovi, but most importantly, we want to continually build up a solid fanbase.”

Janine adds: “I’d be lying if I said I didn’t want three Lamborghinis, my own island called Sasquatch and a nice wee pad on Rodeo Drive. That’s not a lot to ask for, right?”