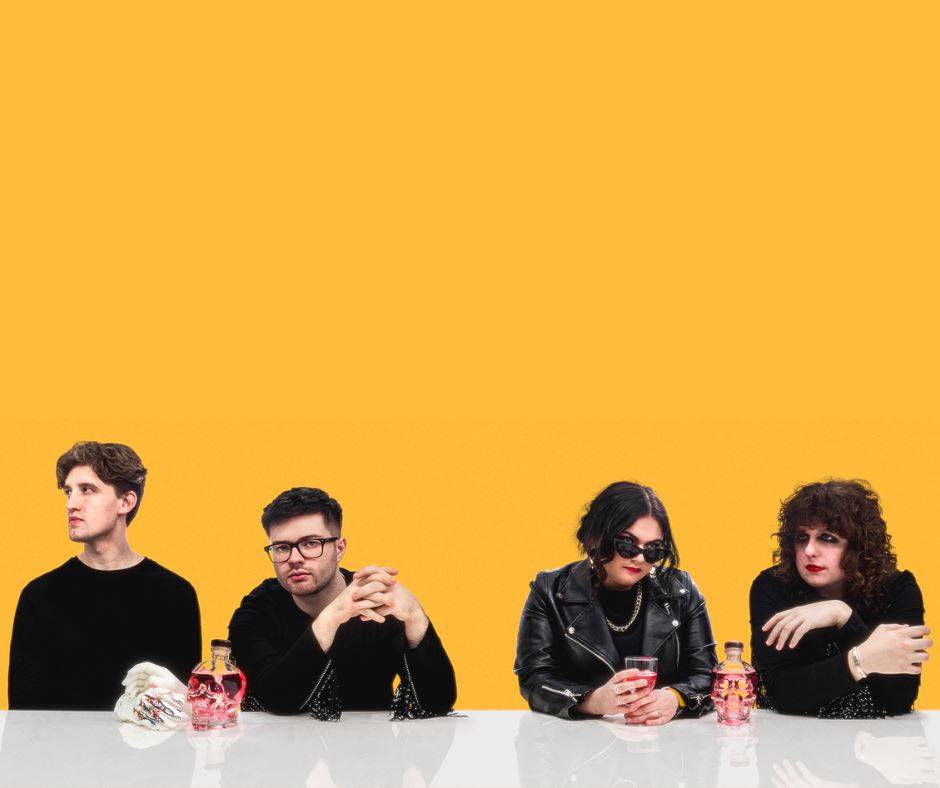 Formed in the historic textile town of Paisley in 2014, The Vegan Leather – Gianluca, Marie, Matt and Duncan – have been building their own legacy from a young age. At 14, Marie was already sending Phoenix tracks to co-vocalist Gian, who was sufficiently enamoured to invest in an embroidered denim jacket bearing their name. It transpired to be a significant bonding point for a band who would be drawn together from a shared love of bright melodies and dark dancefloors, a visual and musical aesthetic that defines their own art-pop style today.

Beyond the rich Scottish tradition of post-punk and angular pop that threads from . Orange Juice . through to Franz Ferdinand, The Vegan Leather wear their more electronic influences on their sleeves. Soulwax, METRONOMY, LCD Soundsystem have been listed as sources of inspiration by the band, as have acts as diverse as Kraftwerk, Nine Inch Nails and Chaka Khan. Regardless of personal heroes, the Paisley band have forged their own path to creating infectious pop melodies that retain razor-sharp cultural insight.

Following a string of successful early singles and festival appearances, in 2018 the band went on to record their debut LP ‘Poor Girls / Broken Boys’ in the legendary Chem19 Recording Studio in Glasgow. The album attracted wide critical acclaim and enthusiastic support from the likes of Franz Ferdinand’s Alex Kapranos and BBC Radio 1’s Jack Saunders. Shortly after the album release and the band’s BBC Radio 1 Maida Vale session in October 2019, The Vegan Leather won Best Live Act at the Scottish Alternative Music Awards and were named by The List magazine among the year’s Hot 100 most influential cultural figures in Scotland.

“This is the band to watch out for guys, I can’t urge you enough.” – Jack Saunders, BBC Radio 1

“With Poor Girls / Broken Boys, The Vegan Leather inject a splash of much-needed art-pop pleasure into the Scottish indie scene.”- The Skinny

“Brimming with ambition and unassailable drive, ‘Poor Girls / Broken Boys’ is as much a thrilling statement of intent as it is a victory lap from one of Scotland’s brightest prospects.” – TENEMENT TV

“The Vegan Leather’s sound channels a certain nostalgia and classic feel whilst also offering their own distinctive, playful edge.” – London In Stereo

“The Vegan Leather tap into that precocious Scottish art-pop lineage while adding something new.” – Clash Magazine

All Night Passion – Food Bank Fundraiser
This website uses cookies to give you get the best experience possible. By continuing to use this site, or clicking 'I accept', you agree to our use of cookies. Please read our Privacy & Cookie Policy to see how we use cookies and to learn about how you can change your browser preferences. Find out more.
Scroll to top