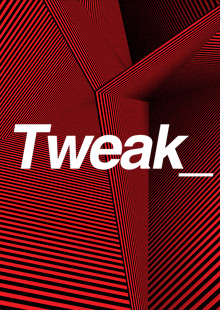 Following our opening party with Seth Troxler, Tweak_ celebrates the closure of the Edinburgh Fringe Festival with the undisputed kingpin of the Paris underground scene. One of the most respected names in world house music, founding member of Apollonia, Circo Loco (DC10) resident since 2002 and true legend… Tweak_ will be moving back to its traditional monthly slot at The Mash House to present Dan Ghenacia.

Dan Ghenacia is the undisputed kingpin of the Paris underground scene and one of France’s hottest DJ exports, having founded and ran for seven years Freak N’Chic and now one of the three creative minds behind new label and b2b2b DJ outfit Apollonia.

Dan’s love affair with music ignited whilst spending a year in California in his early 20’s, soaking up West Coast house and psychedelia. On his return to Paris, Dan channelled this passion into a record selling business opening his own store Traffic Records, but as a true fan of the music he didn’t just want to peddle vinyl – he wanted to play it. Quickly gaining notoriety on the Paris scene with the infamous afterparties at Batofar, it was here he honed his distinctive techno-meets-deep-house sound, at the same time inspiring a new generation of DJs and first sharing the decks with later to become lifelong friends, Dyed Soundorom and Shonky.

With his intuition for raw talent and an ear for a killer track, Dan started his own label Freak N’Chic, breaking artists such as Dyed Soundroom, Djebali, Shonky, and even releasing the debut Jamie Jones EP. An unexpected dispute between the financial partners meant he was sadly forced to close the imprint in 2009, but ever determined, Dan only used this as an opportunity to refocus his artistic ambitions and take them to the next level… Apollonia was on the horizon.

Aside from Paris Dan has spent many summers in Ibiza, although initially “afraid it was going to be cheesy” he grins, DC10 won him over and he quickly scored a coveted residency there. Ten years on, Summer season 2012 saw him rock a prime-time Terrace slot almost every other week, and since the club entered ‘A New Era’ he has become an integral duo along with Dyed Soundorom for their b2b sets. Outside of the club Dan can often be found behind the decks at a villa afterhours or daytime beach party, getting deep into everything, warm, sexy and groovy, whilst giving you a history lesson in house and techno vinyl. Loving to play for hours on end, Panorama Bar, Berlin is another outlet for his extended sets, having once played for 12 hours b2b with Shonky before exclaiming “we could play 12 hours more!”

The afterhours being very much a defining point of Dan’s sound, he has released 10 compilations each complimenting an era of his experiences – Sun Frenchie’s (1999) Co. will transport you back to the San Fran scene he continues to be so inspired by, Kwality (2002) will give you an insight into the depths of the Batofar, No Way You Can Sleep (2002) a taster of life as an international DJ on the road. More recently, Sound of the City (2011) epitomises the underground house style he pioneered in his hometown, gaining him industry recognition and later leading to demand for a BBC Radio 1 Essential Mix and Resident Advisor Podcast.

2012 saw the highly-anticipated launch of Apollonia, Dan’s new record label with Dyed Soundorom and Shonky. Serving as a platform for the trio‘s productions, Dan’s recent collaboration with Shonky ‘Close To The Edge’ gained full support across the underground scene and became a prominent track of the summer, while a solo EP from Dan will be out before the end of the year. Once again exercising his eye for quality music, the debut album from Chris Carrier and Hector Moralez will be released on Apollonia, as well as carefully selected represses of Dan and the boys’ favourite classic vinyl, the first being ‘Underwater’ from POINT G. Also performing as a b2b2b DJ trio presenting special showcases around the world, Apollonia marks a new phase in Dan’s career – travelling and playing alongside his closest allies, more mature, confident and comfortable in his individual sound than ever.