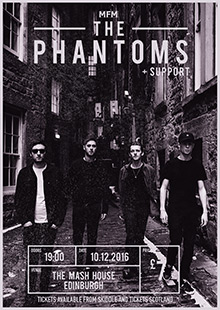 Based in West Lothian, Scotland, The Phantoms formed in May 2012, quickly winning an army of fans with their huge sound and infectious on-stage energy.

It didn’t take long for Scotland’s most influential DJs to pick up on the buzz around the band with debut EP ‘This Is How It Should Be’ earning widespread airplay. A UK tour and support slots for Catfish and the Bottlemen and We Were Promised Jetpacks proceeded. The release of the anthemic ‘Revolution’ a single that was played by radio stations across the UK, earning praise for its sweeping guitars and driving beat.

Influenced by Kasabian, Royal Blood, Catfish and the Bottlemen and Arctic Monkeys, their next single ‘Wasting Time’ was a perfect example of the sound that has earned The Phantoms the reputation as one of Scotland’s most exciting prospects.

The Band started 2016 in epic fashion by selling out King Tut’s in Glasgow as part of the New Year’s Revolution. A new single followed in March with a launch gig at Broadcast in Glasgow, yet another sell out show. The single ‘Lost’ is the bands most commercially successful single to date and is still heavily featured on Spotify, Apple Music and across UK and US radio stations. Following the release of Lost, the band supported Holy Esque at the art school in May, and in June 2016 the band got their first major festival under the belt by playing the Isle of Wight Festival. More recent events include a support slot in Edinburgh for Alabama 3, a top billing at the Dundee “Music for the Homeless” gig and another headline advance sellout at King Tuts Wah Wah Hut in Glasgow.

We Were Giants
Scroll to top