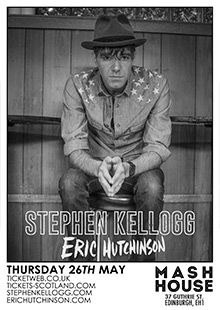 Stephen Kellogg
Stephen Kellogg was born on November 28, 1976. He grew up in Southern Connecticut and in 1997 began his musical career in Northampton, MA while interning for a local club. Over the last decade he has performed more than 1,500 concerts in more than a dozen countries, both solo and with a band. In 2013 Kellogg gave a TEDx Talk about job satisfaction.
When it comes to performing, CBS Radio has called Stephen, “the best live act you’ve never seen.” Another writer at No Depression magazine gives him the oddly flattering title of “the best songwriter you’re not listening to.”. Interestingly though while Kellogg may not be a household name at present, he has persisted in building a substantial career, which has landed him on stage with some of the biggest touring acts in the country (Train, Sugarland, OAR, Josh Ritter to name a few), in the billboard charts, and with his songs as the backdrop of numerous films and TV shows (One Tree Hill, Men of a Certain Age, Mercy). Perhaps most importantly to Kellogg, he’s ingratiated himself into the lives of his listeners. That sort of mentality has garnered him descriptions like this one from Macaroni Kid, “an unassuming manner, self-deprecating humor, a heart for those around him…100% genuine and utterly moving.” His Americana-tinged, sometimes folk, often rock, occasionally pop stylings can make Kellogg hard to define, and his most recent four part album “South, West, North, East” embraces the notion of genre splitting to the fullest.
Recorded literally “all over the map”, the premise of “South, West, North, East” was to record each section of the album in a different region of the USA, with different co-producers and different groups of musicians. The Southern rock flavor of “South” (recorded in Nashville and Atlanta) slides into the cowboy motif of “West” (recorded on a farm in Boulder, CO); and the more indie rock feel of “North” (recorded in a cabin in Woodstock, NY) gives way to the songwriter pop of “East” (recorded in Washington DC). “You often hear about the importance of ‘picking a lane’ and while I completely understand the marketing savvy and focus of that concept, I picked my lane a long time ago; it’s called the ‘words that describe what I believe to be true’ lane.”.

Tweets by @themashhouse
Lord Of The Ring After-party