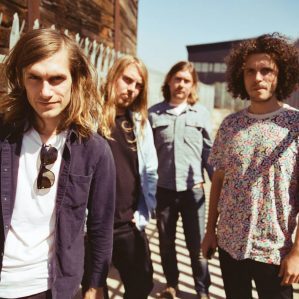 “Modern-day cosmic rock from Canterbury band of brothers” ⋆⋆⋆⋆ – Mojo Album Of The Week | No: 18 Albums of 2017

“unique, soulful and trippy in the best sense” ⋆⋆⋆⋆ The Guardian
“As playful as they are serious and as innovative as they are traditional, this is surely what Syd Arthur set out to be.” ⋆⋆⋆⋆ – Q

“It’s a super summery, nostalgia-tinged… sounds like it’s being played through an Instagram filter – very chilled and with this underlying theme of lost innocence.” – The Independent

Syd Arthur had a stellar 18 months. From playing huge arena shows in the US, touring with fellow progressive-experimentalists White Denim to releasing their most successful album to date – the year has cemented their reputation as a serious creative force.
The album, Apricity, marked a new sonic direction for the band, chillwave influences abounded and a new retro-futurism was formed – not least on recent single No Peace – one of the stand-out cuts from the record. Syd Arthur have built an enviable reputation as a band apart. Formed out of the forest party rave scene in their home county, and with a hard-won DIY self- sufficiency, they developed a sound and approach miles beyond their foursquare indie peers. Here was swirling rock with psychedelic textures, guitar-based trance with a groove. A band adaptive enough, bold enough, to tour with White Denim and The Strokes.�