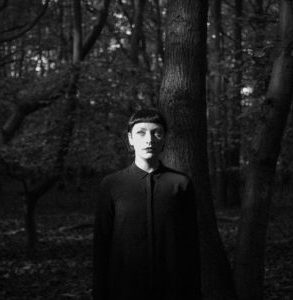 Born in Germany, now living in Rugby, and raised on a diet of techno, a travel-laden upbringing combined with a natural penchant for experimental and diverse soundscapes have paved the foundations for Stephanie. After making her presence felt on the Manchester club scene at various different nights, it was playing at Continue at Sankeys that really ignited proceedings for Stephanie.

After linking up with the multi-faceted Techno pioneer Dasha Rush, and a handful of demo tracks later, Stephanie was signed as an artist to Rush’s well-revered Fullpanda Records – a label that pushes the boundaries of contemporary dance music, built on deep, dark and musically emotive experimentation.

Her first foray into the production world accumulated in a two-track contribution on Luna Tactus on Fullpanda, together with Swedish artist Fjader. Spanning hypnotic, sonic-fused experimental techno with a broody, ambient undercurrent, Stephanie’s two tracks – Perplex and Hypo – served as a fine introduction into her stylistically techno-blemished sound.

This aesthetic carries over into her DJ sets, and explains why she’s been invited to grace the decks at places like Berghain, Tresor and Corsica Studios; moreover, it’s led to a residency at Khidi in Tbilisi as well as one of the UKs best known and longest running after-hours Jaded in London as well as ledgendary Atomic Jam which has been going for over 20 years in Birmingham. Her sonic presence as a DJ recently promoted Resident Advisor to award her Inner Escape Podcast as RA Mix of The Day. More recently Stephanie has been invited to work with 4D in Amsterdam – to be part of their residency ‘Techno is Space’ at Nachtlab in Amsterdam – for her first live performance.

Substance, quality and diversity are the driving forces behind the enigmatic artist who has so far made a serious impact on the techno circuit in the early stages of her career. In both the studio and behind the decks Stephanie strives to bring a raw and gritty modern spin on ambient, techno and experimental electronica, carefully curated and skilfully arranged into one seamless journey.