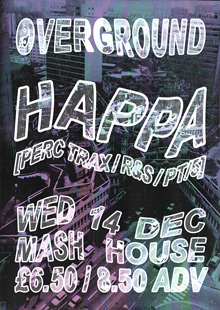 Overground are bringing UK Techno’s most promising innovator to The Mash House for his Edinburgh debut. Having been surrounded by buzz since his early teens, Happa is well overdue a visit to our capital, to shell-out his trademark of rough, industrial-textured electronic music. Aged 14, the Leeds-native wunderkin was already receiving radio play from Loefah[SWAMP81] with his early experimentations in dark, dmz-inspired bass music, which Mary Anne Hobbs [BBC Radio 6 Music/XFM 94.8] described as the most remarkable music she’d heard in as long as she could remember. Shortly afterward, Four Tet sought out the young producer for a remix, which received widespread critical acclaim. Such is the talent of teenage happa, that he was playing at some of the most high-profile techno clubs in the world, such as Berghain, Corsica Studios, TrouwAmsterdam, Gashouder Amsterdam and fabriclondon (RIP), before he was old enough to legally enter as a punter.

With a number of impressive club and festival appearances, remixes and productions under his belt, the techno-prodigy has turned his attention to working on his own label – ‘PT/5 Records’. It is named after Part V of the Criminal Justice Act of ’94, which gave police the power to shutdown illegal raves. The first release of this venture was 2015’s ‘PT1 EP’, which displayed a qualitative axis shift for Happa; his aptitude at marrying pounding beats with dark, ominous landscapes was sharpened to a knife-edge. If PT1 was the product of a young artist refining his sound, 2016’s ‘PT2’ is the bass-heavy, hypnotic call to arms of an artist with enough raw talent and perseverance to create something truly astounding. Having more recently been cosigned by James Blake to produce a beat for 1-800-Dinosaur’s latest leftfield grime project with Trim, it seems Happa is already two steps ahead of where the next hype in dance music will be.

Tweets by @themashhouse
A Love From Outer Space (sold out)