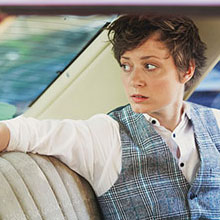 When Mo Kenney started writing the songs that would become In My Dreams, she was in a sweet spot: Mo had just recorded her debut, and wrapped up her tour feeling like she had all the time in the world to write anything. In fact, she didn’t even realize that the title track, which was the first song she wrote, would become the starting point for her next album.

The Canadian songsmith’s 1930s Parlor guitar she purchased after her tour shaped In My Dreams, which sees its US release April 29th, 2016. “It’s the best guitar ever. I love it so much,” she says of the instrument she bought from the Halifax Folklore Center. But there was something besides her guitar driving her to write: the breakup of a long distance relationship, a subject that trends track by track. “There’s definitely a theme to the album,” Kenney says. “It’s reflective of what I was going through at the time… spending a weird couple of years in and out of relationships. That was on the forefront of my mind and it came through in my writing – most of the songs are about it.”

The biting and relatable lyrics stay true to Kenney’s mantra of unabashed honesty in order to create music that connects. Mo’s darker muses include Elliott Smith and Sylvia Plath, as evident in “Take Me Outside” and “Mountains To The Mess”. However, the progression of her songwriting craft compared to her debut isn’t indulgent or maudlin. She describes her relationship with producer and mentor Joel Plaskett as the yin to her yang. “With some songs, I knew that he would add something cool to it and make it less dark…that’s one of the things that he brings to the table,” Kenney explains.

Recorded in Plaskett’s studio, Mo and her musical counterpart took advantage of the technology his new production space presented. “He has a super hi-fidelity Neve board now, so the difference in the sound quality in the studio [compared to her debut] was really noticeable,” she said. “It has plenty of analog equipment, and I love the sound of tape.” This recording method and the liberal use of vintage keyboards yielded a warm and rich sound that complements Mo’s alto. The rich harmonies on the record are all hers, and they add an authentic resonance to other tunes, like “Field Song” and “Pretty Things”.

“I never censor myself when I write,” she explains. “I just write down whatever comes into my head. I think that because I am quite private, I used to be a little cryptic to protect myself, but I have been writing a little more honestly lately.” This honesty stems from the emphatic response to her debut by critics across Canada, where she’s rising in the ranks of our northern neighbor’s music industry.

An earlier version of “I Faked It”, was written by Mo, Gordie Sampson and Willie Stratton at an intimate songwriting retreat called The Gordie Sampson Songcamp. This, along with the rest of the songs on In My Dreams, reveal a rising talent whose candor and courage as a lyricist deserve the recognition the 25-year-old has received thus far. The record was just nominated for a JUNO Award for ‘Alternative Album of the Year’, voted ‘New/Emerging Artist of the Year’ by the Canadian Folk Music Awards, and has won numerous Nova Scotia and East Coast Music Awards. This outpouring of positive responses early in her career has opened doors to national and international touring opportunities with Ron Sexsmith, Frank Turner, and on lineups at international festivals throughout Europe and Australia.

Fans of her 2012 self-titled debut album undoubtedly noticed the songs on her second album are plugged in and blown out, making her sound bigger and more rock leaning. Working the material out with two friends on bass and drums meant she could take them out on tour when the record was done. These companionships assuaged her fear of not only the sophomore slump, but allowed her to envision them working on a live stage. Having that bigger sound gave her a sense of freedom on the road and in the studio. “With acoustic songs, you have to think about what you’re recording because everything is sparse and exposed. A bigger rock record is a lot more fun because it didn’t feel as delicate,” Kenney says. As for her personal favorite, Kenney loves playing “Wind Will Blow”. She was inspired by her songwriting hero Elliott Smith to try writing in drop C tuning. “I like how the guitar sounds. I’m proud of that one,” Kenney says. “And it’s dark, so that might also be why.”