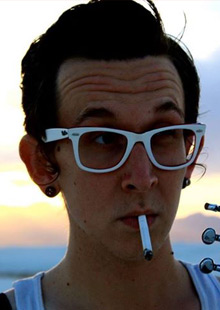 MICAH P HINSON will be in the UK for a very short tour (no Glasgow date) and it’s the first time he’s played Edinburgh in aeons, so he’s very much looking forward to getting back into what he describes as ‘the magical city’ to perform his debut album in its entirety plus a mass of songs that were collected into his eight LPs, EPs, and Singles. So, primarily designed to celebrate the 10th Anniversary of the release of Gospel, this gig will effectively be a retrospective of Hinson’s entire career to date, with his full back catalogue now available again (not least at this gig).

If you’re already a Micah P. Hinson fan and know what a great live performer he is, this is genuinely unmissable. The last time he played here (Cabaret Voltaire, 2007) was somewhat legendary, by all accounts. So, if you’ve never seen nor heard of him, prepare to become a fan, as he woos you with his glorious baritone, brilliant song-writing and potent combination of Americana, folk, indie, punk and rock n roll influences.

Personally invited by Micah P, both JAMES GRAHAM (THE TWILIGHT SAD) and DELTA MAINLINE will perform as his special guests on a number of songs.

Having just released a new single and video to widespread acclaim (with a new album coming in 2016), DELTA MAINLINE will also play a supporting set of their own, as will SUPERMOON. The exciting new project of singer-songwriter Neil Pennycook (Meursault), Supermoon is equally going great guns just now on the back of a run of recent gigs and releases for Song, by Toad. Supermoon will be performing as a duo for this date (with Neil on vox, guitar, keys and fx, plus a drummer).