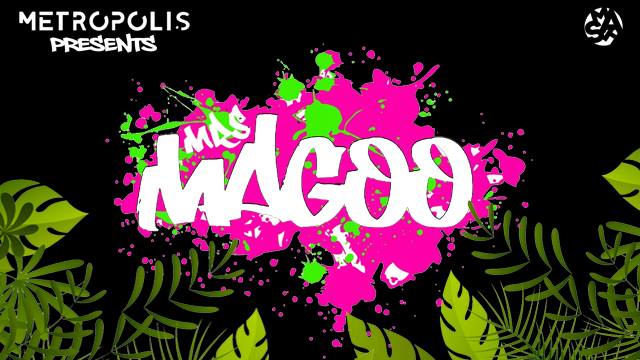 Metropolis Scotland proudly present to you Scotlands very own Mrs Magoo in the intimate loft setting at the The Mash House.

This is set to be a whopper of a night!

With two nominations and one award for best female DJ at the We Love Jungle Awards, a regular radio show with Kenny Ken on both Origin and Rough Tempo, weekly shows with Bellyman, dates lined up across the US and a tonne of b2b sets with pioneers of the genre such as Nicky Blackmarket and Garry K, things are working out well for Mrs Magoo.

Her unmistakeable sets, built on a foundation of smooth rolling dnb and crashing amens are liberally sprinkled with ragga and jump up and when combined with her impeccable style, both on and off the decks and her infectious energy it’s easy to see how she’s making a mark.

But it’s been a journey getting to where she is.
It kicked off back way back when she was just 8 years old, borrowing tape packs from her dad; the sounds of Helter Skelter, Accelerated Culture and Sidewinder all playing just a part of the musical influences she absorbed growing up, which when coupled with the punk and rock her mum loved gave her a solid foundation from which to draw her sound.

Come 17 years old, she was hitting her first rave – Rebirth, and soon after that was getting her hands on a pair of 1210’s, back then though… her sound of choice was happy hardcore. After a weekly internet radio show led to some bookings, Mrs Magoo found herself increasingly drawn to the sounds of jungle and dnb and by 2013 she was a certified junglist. That year saw her playing her first headline set at Jungle Nation in Aberdeen, one of Scotland’s longest running jungle nights.

2 years working with ASBO Records and two regular radio shows (one with the enigmatic Bellyman, the other with the 59th Degree in Edinburgh every few months with MetraGnome is no mean feat trust me. On top of these she still manages a busy gig schedule and residencies at DnB Splash London, Roller Coaster in Liverpool and Unity in Edinburgh have helped her carve out a name for herself, even now breaking that elusive US market with a residency at BBB (Better Breakbeat Bureau) in Wisconsin. Now it’s going full circle; from early days listening to mixtapes – to making her own, from a bright eyed young raver taking her first tentative steps into Rebirth, to headlining at the place where it all started.

Magoo’s just beginning though, she’s got big plans : currently she has a sponsorship from Canadian clothing company DnB Culture (www.dnbculture.ca) which has inspired her to have her own line of merchandise, producing her own music and many more international bookings.

She’s one to keep an eye on.