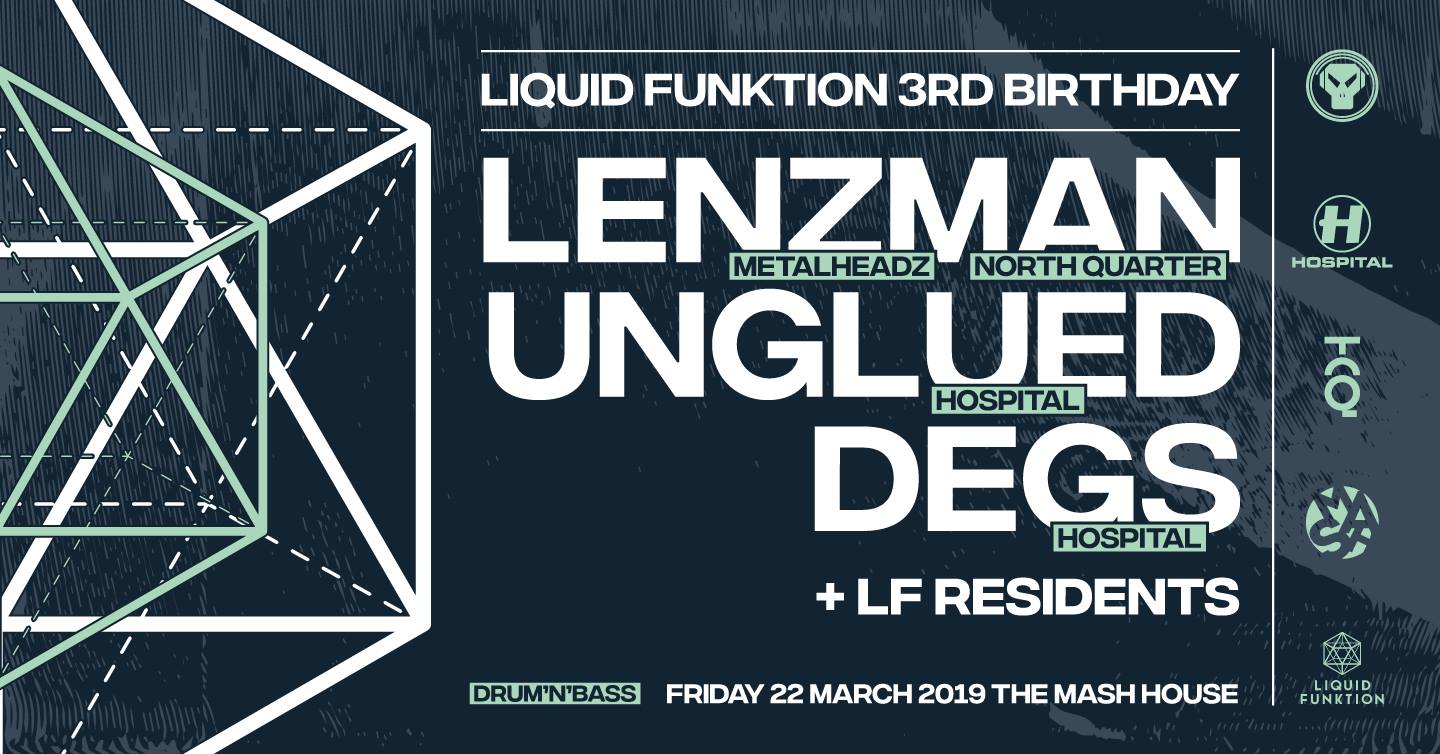 We are turning 3! Massive thanks to everyone who has supported our nights since we started. What a wicked few years it’s been. After a sold out night with LSB & DRS in November, we are upping the ante for the birthday special.
3 years… 3 guests. Guaranteed waves

WIN TICKETS
Tag your name and 2 friends on the event wall and click ‘going’ (all three people) to win tickets and other prizes. Winners announced on event day. Ticket holders will be refunded.

Lenzman – Bio
A name synonymous with Liquid and all-things soulful in D&B, Lenzman has not only carved out a healthy discography on the likes of Metalheadz but also on his own label, The North Quarter. He is a a top-drawer producer with Liquid Funktion faves such as ‘In my mind’ with IAMDDB as well as remixer, such as his rework of Children Of Zeus’s – Still Standing, a winner at the 2016 Drum & Bass awards. We can’t wait to see what he brings for a long overdue return to Edinburgh!

Unglued – Bio
Perhaps best known for ‘that bootleg’ of High Contrast’s ‘If We Ever’, Unglued has been climbing the ranks of the Hospital ladder ever since his rework of the undisputed classic has been doing the rounds across clubs and festivals. Subsequent rowdy releases such as ‘Ghetto’ show he’s a producer going from strength to strength, who will be exhibiting some fresh material in the capital.

Degs – Bio
Another rising star, Degs has brought both musical flare and versatility to the MC’ing game. His infectious positivity is one few can consistently deliver both live and on his productions, such as Low:r’s ‘Heron’s Skankout’ released by our pals over at Terra Firma. He helped fuel the unforgettable parties of Croatia for Hospitality on the Beach, and for that alone, we had to have him up to work his magic at The Mash House!