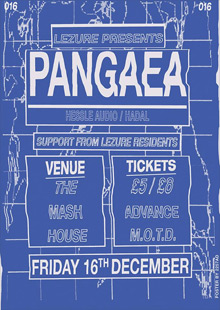 For anyone with an interest in bass music, techno or house, Hessle Audio has been an integral part of these scenes for the past nine years. It began as a meeting of minds – Pangaea, Ben UFO and Pearson Sound, having studied together at the University of Leeds; the outward facing result of pilgrimages to foundational dances such as FWD>> and a response to the labels that inspired them, like DMZ, Tempa and Hyperdub. The early records on the label emerged at the intersection between the sub-frequencies of Dubstep and the momentum of UK garage, whilst more recent plates document a sound very much informed by techno.

One producer integral to the development of Hessle Audio is Pangaea (real name Kevin McAuley); it is his records for the label that have often been miles ahead of anyone else, and proved vastly influential. In his own words.. “For me production is all about doing your own thing in whichever way you want to do it…” – listening to his records this spirit becomes evident; chest rattling subs contrast with light and airy pads, while you might get pummelled with manic drums elsewhere. Though his relatively small discography might be dwarfed by similar producers, it also betrays a patient sense of quality control – which leads us to the way Pangaea deejays and responds to the dance.

Much like the other two thirds of Hessle Audio, Pangaea stands among a rare type of selector, in the sense that otherwise disparate tracks are brought together in interesting, new and thoughtful ways. You might hear a track by Bruce being mixed into Nightmares On Wax, or Golden Teacher being mixed into an Acido record. When listening to a Pangaea set, it is clear that this multi-faceted, yet cohesive approach is what sets him apart from the average DJ.