John Bramwell (I am Koot) 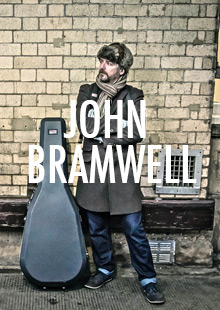 I Am Kloot‘s singer songwriter John Bramwell, returns to the stage this autumn 2015, armed with his first set of brand new songs since the bands UK 2014 top ten album ‘Let It All In’.

The Tour will take in dates throughout the UK and Europe.

During 2014 the Mercury prize nominated songwriter (robbed) sporadically turned up at venues in “Any town, anywhere” throughout the UK. Playing a different set every night, and trying out stripped down versions of his 100 or so previously released songs, he regaled, beguiled and during certain parts of the set just flat out confused Kloot fans old and new. After fifty or so performances of varying length, spontaneity and cohesiveness and armed with a new found confidence in his storytelling abilities, he returned to his home in Crewe and put the finishing touches to his studio / garage and set about recording new songs for his debut solo single ‘Times Arrow’.

With these recordings ready for release to coincide with the tour and a bag of classic songs and great stories, John Bramwell brings poetry, great guitar playing, a beautiful, unique voice and a little chaos to a town near you.

‘Utterly compelling, quite beautiful and frequently hilarious” THE GUARDIAN