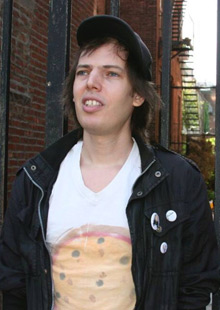 Some of these songs found their way to the Rough Trade Records label in London (famous indie label of The Smiths, The Strokes, etc); since 2001 Jeffrey has been releasing critically acclaimed albums on Rough Trade and touring the world with his band, currently Jeffrey Lewis & Los Bolts (with Heather Wagner on drums and Emily Mem Pahl on bass).

In addition to headlining tours, Jeffrey has often shared gigs with the likes of Stephen Malkmus & The Jicks, Roky Erickson, The Mountain Goats, The Fall, Daniel Johnston, Devo, Adam Green, Pulp and other luminaries.

In between his hypnotically moving folk narratives and his fuzzed-up indie-punk songs, Jeffrey also harnesses his comic book interests to create and perform “low budget videos,” colorfully illustrated visual songs on historical topics (like an 8-part “History of Communism”), or strange flights of fancy (like “The Creeping Brain”). Jeffrey has self-published eleven issues of his comic book series Fuff, and Jeffrey’s writing, illustrations, comic books and music have been featured multiple times each by The Guardian, The History Channel and The New York Times (among other places).

The new album “Manhattan,” mixed by John Agnello (Dinosaur Jr, Sonic Youth, Kurt Vile, Bob Dylan), will be released on Rough Trade in October 2015 – it’s the best album Jeffrey’s ever done, but not the best he’ll ever do.

The Undercover Hippy
Scroll to top