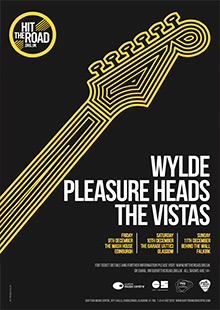 National youth music touring project, Hit The Road visits Edinburgh, Glasgow and Falkirk from 9-11 December 2016. Managed by the Scottish Music Centre; the project provides young musicians living in Scotland, between the ages of 14-19 years old, the opportunity to learn about the live industry before embarking on a professionally managed tour. Hit The Road aims to equip young artists with the knowledge, contacts and tools to work within the live industry and is funded by Creative Scotland’s Youth Music Initiative (YMI) and PRS for Music Foundation.

The initiative has acted as a key stepping-stone in the development of some of Scotland’s most promising young artists, including; KLOË, Model Aeroplanes, JR Green, Indigo Velvet, Man of Moon, Be Charlotte and more.

The Vistas are a young alt-rock quartet from Glasgow, aged between 16-18 years old. They’ve performed in The Scottish Parliament, and in July played several Scottish and English dates to promote their single ‘Been Here Before.’ They’re currently working on their debut EP “Foolishness and Adolescent Tales” which will be released in early 2017.

Hailing from Falkirk, Pleasure Heads are a young alternative four-piece. Formed just over a year ago, the band have already released a debut EP and supported some of their favourite bands including Baby Strange and WOMPS. Hit The Road is their first touring experience.

Wylde are a young Shoegaze/Dream pop band from West Lothian, who released their second single ‘How’ last month. They’ve supported acts like Tongues and Stillhound and performed at multi-venue festival, The Big Discovery in Edinburgh and Oxfordshire’s Truck Festival earlier this Summer.