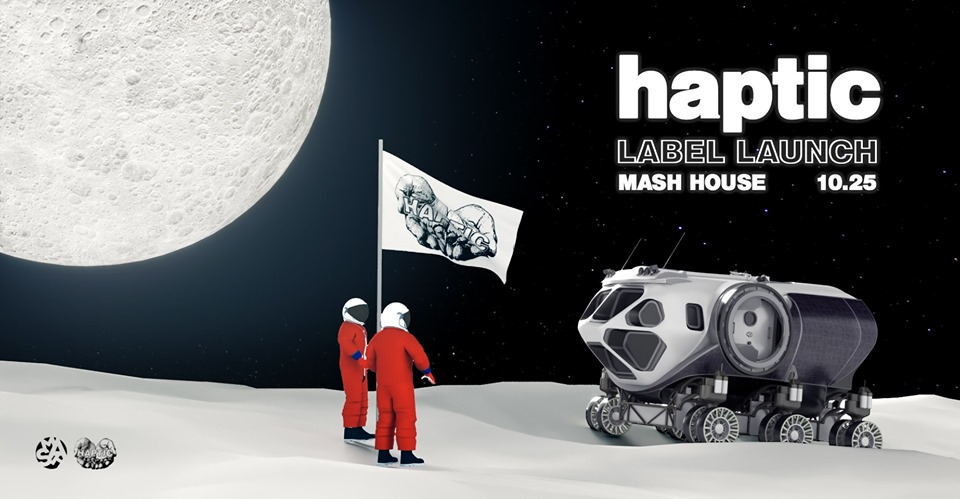 It’s been aeons in the works but we are finally ready to launch our new imprint! Our first Various Artists release on haptic will be available to buy on Friday 25th October and we are celebrating with reckless aplomb on the night with sets from ourselves and some of our favourite Scottish producers and selectors.

Joining us in the main room we have a back to back set from local sweethearts Treb & J Wax. These two have been making waves with their productions for time now with releases on Hilltown Disco, Scuffed Recordings, Nerang Recordings & Unit Two Records amongst others. Their productions centre squarely on the club, utilizing breaks and elements of electro, hip hop and house to create a thoroughly danceable din. Truly two of Scotland’s hardest working producers, this pair have had a particularly prolific year and we couldn’t think of a better chance for them to showcase some of their mountain of unreleased material… expect scenes!

Changing things up a bit in the bar we have C-Shaman & Feena, two Edinburgh based selectors who have consistently impressed us this year and whom we are exceedingly excited to welcome for their haptic debut!

Chris AKA C-Shaman has worked tirelessly for just under two years, making significant inroads into Edinburgh nightlife with his Sneaky Pete’s based night Heaters, bringing established names over for fun-filled and joyous parties as well as affording dozens of local selectors the chance to play to new audiences. His recent 12 hour takeover on Rinse FM has helped cement Heaters’ reputation as an Edinburgh based bastion of quality and a champion of new talent, involving many of his past guests including ourselves! We are only too happy to return the favour.

We first saw Feena warming up for Mind Yer Self at Heaters back in March and were suitably impressed with her selections. She has since played for MYS at their home @ The Berkeley Suite in Glasgow alongside C-Shaman as well as holding down a regular slot on Edinburgh community station EH-FM. Expect everything from electro and leftfield house to rare groove, funk and balearic lushers. These two have a great musical rapport in the booth and we are muchos excited to see them play together once more!

For a taste of what to expect from ourselves on the night you need look no further than our slot for Heaters on Rinse FM. This mix features an hour of forthcoming material from our residents Matty Lech, Cammy Macphail, Freddy Lancaster, B-Tek & Reid – we hope it makes you smile 🙂 https://soundcloud.com/rinsefm/haptic040519

Free Yard
This website uses cookies to give you get the best experience possible. By continuing to use this site, or clicking 'I accept', you agree to our use of cookies. Please read our Privacy & Cookie Policy to see how we use cookies and to learn about how you can change your browser preferences. Find out more.
Scroll to top