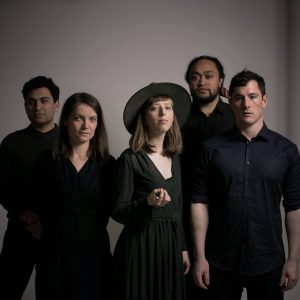 FRENCH FOR RABBITS:
“Hailing from Waikuku Beach, a small settlement in New Zealand’s South Island. They play music that drifts on the edge of fragility, but expands out into washing layers of ethereal, nostalgic dream-pop. Vocalist and primary songwriter, Brooke Singer, expresses intimate narratives against the cast of the damp colonial cold; her voice delicately steeled against John Fitzgerald’s winsome guitar lines, and the eerie instrumentation of their band mates. It’s a weather-beaten dreamscape, nostalgic for warmth and hopefully lilting towards sunnier climes.”

MT. DOUBT:
“Mt Doubt began as a one-man project in 2015 and has since sprawled into the dark-pop sextet it is today. Led by songwriter Leo Bargery the band have released two studio albums and more recently an EP on Scottish Fiction Records. Their sound is influenced by the likes of The National, M83 + Nick Cave”

OCEANCODE:
“Carefully marrying the genres of folk, pop and rock together to create a distinctive sound with catchy melodies and clever hooks, OceanCode are a four-piece folk-pop band coming together from all across Scotland. Formed in Edinburgh in late 2016, the band features vocalist/guitarist Ruth Gillies from Inverness, bassist Morgan Smith from Aberdeen, guitarist/vocalist Peter Wall from Dumfries and drummer David Burns from Glasgow. Since forming, they have received warm reactions from shows at Sneaky Pete’s, The Mash House, Electric Circus and King Tut’s. Looking forward, the band is preparing for the release of their first single later in 2017.”

The Unconscious Collective vs Slippery People
Scroll to top