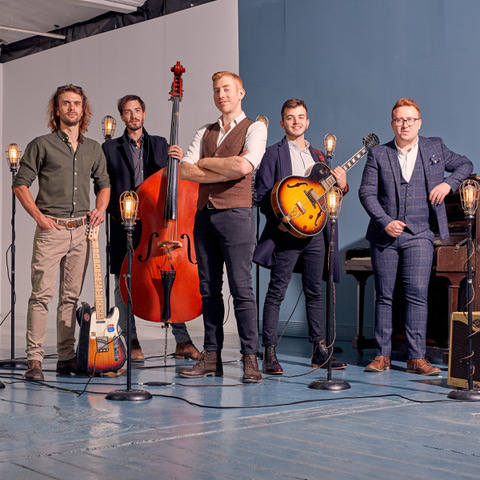 Formed by a young busker; frontman Richie Prynne in his early twenties. He soon recruited his childhood friends Dan Edwards, Ryan Thomas and Sam Barrett who spent years honing their craft on the streets of London, Cambridge and Bedford England. In later years Manchester based pianist and frontman in his own right Tom Seals and Jazz trained drummer Felix Weldon joined the motley crew and so the dream-team as it is now known was complete.

From early on ‘Guerrilla busking’ had become absolutely fundamental to CC Smugglers innovative band promotion. They would pop up and play to queuing crowds waiting to go in to shows of artists they saw as relevant. The long list of targets included the fans of SeaSick Steve, Old Crow Medicine Show, The Devil Makes Three, Jools Holland and more.

In 2013 their journey took a drastic turn as they designed a bid to create a career as touring stage performers. In their usual innovative way they used their well-rehearsed approach of ‘Guerrilla Busking’ to create a media splash and reach bigger number of fans than ever before.

Cue their most daring ‘Guerrilla Busking’ mission to date. The eventual success of which would elevate them to national recognition. The stunt was picked up and reported by The Sunday Times and triggered a series of events that saw them eventually touring their stage-show across the world.
​
The aim of that mission was simple. Busk their way on stage with two-time Grammy aaward-winning Nashville band ‘Old Crow Medicine Show’.
​
How? Follow them to every date of their UK tour busking to their audiences on the streets, sleeping in a small van in the freezing depths of British winter, in the hopes of earning the bands respect and eventually getting invited on stage.
​​
NOW on the brink of their first official debut album they are releasing that documentary footage as a part of a new docu-series that documents and compares their struggles to forge careers in the music industry then & now.
​
See the 2018 ‘Then & Now” docu-series here: