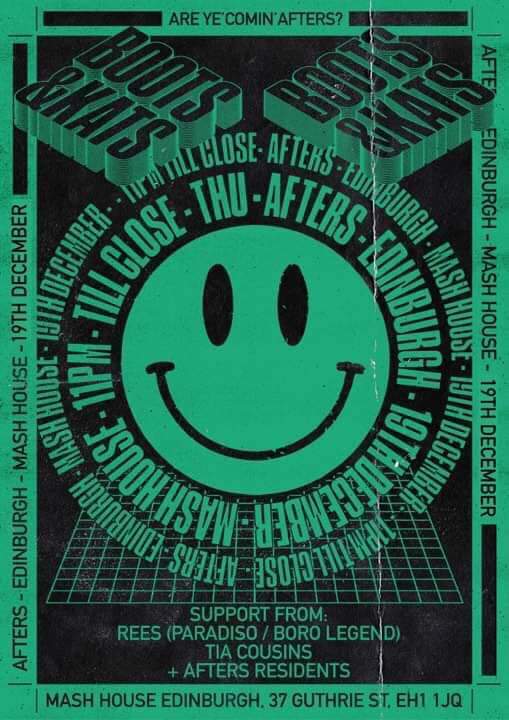 Two of the Republic of Ireland’s biggest stars in Boots & Kats will be flying over to make their Scotland debut. Boots & Kats have been headling and even curating festivals over on the Emerald Isle and we feel that this is a real coup to get them over for their Scotland debut. This for sure is an unmissable event, particularly for the sizeable amount of Irish expats living in Edinburgh.

Also on the roster is REES. The Middlesborough lad has been making waves right across the UK and is on a trajectory straight to the top. With a large soundcloud following and launching his own label, Paradiso Records, the Ape-X (Newcastle) resident plays only his second ever Scottish show.

Joining REES will be Tia Cousins – the Essex girl now making waves in London as a class selector as well as having a regular show there on NTS Radio. There is plans in the work for Tia to be playing a popular Edinburgh podcast before the show. (Separate link to look out for in the near future!)

In the bar area we will have a special guest DJ set from Santa Claus who will be playing out all the best floorfillers, disco hits and Christmas tunes along with giving out presents to everyone who has been good this year…

Also in the bar area will be Afters residents (TBA) and Fresh Take Records + more TBA.

Tickets will be sold from Fixr. Extremely early bird tickets will be on sale for this at a staggeringly low £3. There will be limited £4/£5 tickets to snap up fast before final release on £8 and £10 OTD.

Extremely proud of this huge line up and to have it the week before Christmas and the week exams finish I think this will be an amazing night. Hope to see you all there

We’re having a Festive Afters – are ye coming?

Junglism X High Society X 59th Degree Xmas special!
This website uses cookies to give you get the best experience possible. By continuing to use this site, or clicking 'I accept', you agree to our use of cookies. Please read our Privacy & Cookie Policy to see how we use cookies and to learn about how you can change your browser preferences. Find out more.
Scroll to top