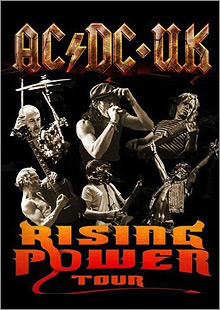 ‘We just want to make the walls cave in, and the ceiling collapse!’, remarked the legendary Bon Scott. An ethos that AC/DC themselves have followed throughout their entire career, and an ethos shared by AC/DC UK!

Having spent the last several years touring the UK and Europe, AC/DC UK have established themselves as one of the finest tribute acts around. Covering songs from both eras of AC/DC faithfully, the band features both Bon Scott, and Brian Johnson performances. The band bring their wall of Marshall stacks, and fully firing cannons for a spectacular stage show. The AC/DC trademarks are all there; Angus Young’s strip, Gibson and Gretsch guitars, and even Bon Scott’s iconic walk through the crowd with Angus on his shoulders. Covering the entire AC/DC catalogue, from1976’s High Voltage, up to 2014’s Rock or Bust, you will hear all the hits! From Thunderstruck to Back In Black, Highway to Hell to Dirty Deeds, and every other classic track that launched AC/DC to legendary status.

AC/DC UK have played many major festivals throughout the UK and Europe; Including CoverFest (PL), Huntenpop (NL), Mockfest (UK) and Mathew Street Festival (UK), as well as historic venues such as the Liverpool Cavern Club, Glasgow ABC, and more.